You come upon the village, called Sister Stones, which is nestled between the river and the actual Sister Stones. There are people making a living ﬁshing, farming, herding, and all sorts of other trades. But the place itself is not especially large, maybe two or three hundred live here. A gentle and light layer of snow is falling here, while just outside the valley snow was up to the ankles right near the roads and falling far harder.

As you come into the village proper the locals seem concerned by the snow. None of them remember when it last actually snowed in Sister Stones. It would get cool, but it wouldn’t snow.

The Sister Stones is a short module suitable for using with a few editions of D&D or other fantasy Tabletop games.

The Players encounter the town of Sister Stones, a place that rarely even experiences snow whilst the surrounding hills and mountains are coated in snow each winter. The river is plentiful with fish, the fields grow good crops, and the livestock grow strong and fat. But this year, there is snow falling in Sister Stones. Something is ‘wrong’. The Players find information from some of the locals and end up investigating the Shrines scattered amongst the actual Sister Stones. The tall karst mountains dot the flat land around the river, making them jut up out of the landscape as if they were placed there by godly hands. On a tour of Shrines put at the bases of the Sister Stones, they find one of the Shrines is not as it should be. Upon opening the Shrine, they enter a surreal dream-like world and after being accosted by the native inhabitants of this world, they come across an incalculably old druid enmeshed in a kind of cage of stone and roots inside an ornately painted shrine. Leaving with the Druid, and following the guidance of the murals in the Shrine, they carry the dying druid to the top of a karst and into a hidden valley which almost resembles a crater. Inside is a stone box, where they perform a ritual, and place the druid inside. It catches into a burning flame which appears to attract the spirits of the dead. Eventually a young, teenaged druid comes out from inside the stone box bewildered and confused but who wants to return to the Sister Stone. The players then escort the Druid, back to the Sister Stone, inside the Shrine, and find the landscape inside has radically altered. They are accosted by a different set of inhabitants, who seem determined to not let the new Druid take the place of the old Druid. After the players nearly destroy the old Druid’s sitting place the new Druid sits down and the place changes radically before their eyes. Then the Players must leave this hidden landscape, and exit the Sister Stone. As the story reaches its epilogue, the players find themselves back in the Village of Sister Stones, with the opportunity to explain events to the locals, or to just continue on their way. 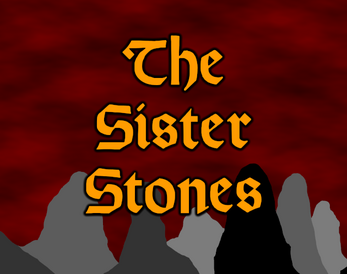